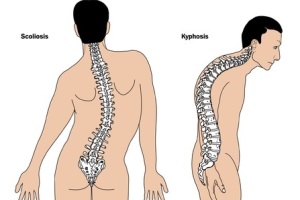 Scoliosis is a way to describe which way your spine is shifted. It can be painful but it doesn’t have to be. Chiropractic care can help.

Today’s topic is scoliosis. What is it?  How do we treat it? How do you diagnose it? Is it a significant finding?

So, today we want to talk about this.  I have a lot of patients who come in they said, oh you know somebody told me I have scoliosis.  Well, to me, I go what does that really mean? What are you in pain? That’s really the key, do you hurt?

Now, in your neck, you can lose that curve so you’ve got loss of lordosis. When we look at the front view of the spine it should be straight but if the curve goes this way we call it scoliosis. So all it is is a way to describe which way your spine is shifted.

Is that significant? I don’t know but what I do know is if there’s misalignment and pressure on the nerves that can cause you to shift away from a center posture. Can chiropractic help with that? The answer is yes in many cases we can.

Our job is to restore function to the joints and a lot of times when you see joints that are out of alignment you’re going to see this shift, you’re going to see a scoliotic shift. Sometimes there’s severe cases and there’s certain chiropractors who specialize in severe cases for restoring scoliotic curves but the majority of people with the scoliotic curve will respond really well to traditional, specific, gentle, safe chiropractic care.

If you want a consultation call our office. Any of the doctors in our office would be happy to work with you to see if chiropractic is right for you and your condition.  (360) 260-6903.

According to statistics from Spinecor Centers of America, there are more than four million scoliosis cases in the United States. Of those, 442,900 office visits, 133,300 hospital visits, and 17,500 emergency room visits are made by children suffering from scoliosis annually. In 2011, nearly 230,000 adults were hospitalized due to scoliosis. In total, 20% of all spinal deformity cases are due to scoliosis.

While it’s relatively straightforward to identify someone with scoliosis, determining the exact cause can be much more challenging. Researchers have found a number of possible causes, including spinal deformities and neuromuscular problems, as well as inherited diseases. Recent studies have shown that genetics could potentially play a significant role in acquiring scoliosis.

Many cases of congenital scoliosis can be traced back to a malformation of the spine during the first three to six weeks of in utero development. This could be due to a failure of formation or a failure of segmentation, or some other combination of factors. When the spinal segmentation is incomplete or abnormal, the result can be that an abnormally shaped vertebra will become fused to a normal vertebra, leading to a lateral curvature of the spine.

Complicating the diagnosis of scoliosis is that it can be hard to detect in the early stages, as there won’t initially be any signs or symptoms. A lateral spinal curvature of at least 10 degrees is considered scoliosis but at that stage the only sure way of recognizing that a person has it would be an x-ray. When the curve worsens, to 20% or more, the chances of detecting the disorder becomes greater, as will the chances that pain or discomfort will begin to occur.

Signs of scoliosis include clothes hanging unevenly on a person’s back and shoulders, or the person’s body tilting to one side or the other. A spinal curvature can lead to trunk imbalances and other problems such as muscle spasms. In severe cases, scoliosis can result in uneven hips, slow nerve action, heart and lung problems, and calcium deposits on the spine.

Treatments for scoliosis vary and depend on how far the curvature has progressed. Especially in adolescents, observation, and if necessary, bracing are the preferred treatments. Bracing can work with younger patients because their skeletal system is still developing and is more responsive to such treatment. In the worst cases, surgery will become necessary.

Many people come to our offices looking for a cure for their scoliosis. Unfortunately, much like diabetes, while the condition is very treatable, it will require ongoing care and management. For long-term success with scoliosis, a number of things need to happen, including a repositioning of the spine, relaxing of the connected muscles, and a retraining of the brain to use the muscles and spine differently. Your body has adapted to the incorrect position and so you need to train yourself to align and move in the proper way.

If you or a loved one is suffering from scoliosis, treating the problem before it becomes too severe is recommended. Zenapatic Chiropractic offers a FREE consultation to assess the severity of your spinal curvature and formulate a treatment plan. We have a strong commitment to helping our patients fully recover their health and wellbeing. Call today to begin down the path towards an improved and more energetic lifestyle!