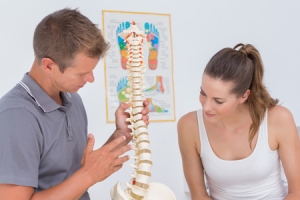 It is important to seek conservative care first before going ahead with surgery for a herniated disc or disc protrusion.

Today I want to talk about herniated discs disc bulges or protrusions in the disc.

These are words you might see if you do a Google search or talk to doctors. They say, “hey you have a disc bulge of a disc herniation.”

So, that necessarily doesn’t mean that a disc bulge or a disc protrusion could cause pain, but there are many times when it does. So here’s what the research is showing.

Dr. Mark Student just did a published study on the benefits of chiropractic for disc bulge, disc herniation, disc protrusion. One of the things I found very interesting is the fact that many of the mainstream media overlook the biomechanical factors of the spine. Meaning, how are the joints moving within gravity or without gravity? How are the muscles firing?

They classically will take an MRI.  I have an MRI of somebody who chatted with me and I will put up her MRI here, you’ll see right in the middle of her neck around c5, c6 there is a bulge that’s pushing into the spinal cord. So, this patient has a disc bulge, disc protrusion.

She went to her primary care physician they ordered an MRI, that’s what you’re seeing here, the primary care doctor said, “hey, this is outside my scope”, and she got referred out.

Now she got referred to a neurosurgeon, her symptomatology was she was having right arm pain. So the the doctor said you need to do surgery immediately and so unfortunately in her case she did.

What concerns me in this published study by Dr. Studin, he says that “patients should have alternative care.” First, meaning chiropractic or physical therapy or some sort of non–invasive surgical procedure prior to having surgery. This lady just went straight to surgery and I’ll show you after effects of the surgery.

You can look here you can see there is even a more extrusion into the spinal cord. You can see the dark mass, this is actually an artificial disc that was put in her neck. The patient woke up out of the hospital she said hey my right arm feels better but after the pain meds wore off and the swelling went down her right arm pain returned and now she has left arm pain, and she has chronic neck pain, she can’t drive in a vehicle very long, the bumping and bouncing really exacerbates her.

It’s been three months and she asked me, “Hey Dr. Troy what do you think?” I said well I can’t do anything about the surgery but maybe we should have tried conservative care first. Now that’s my mission is hey let’s do conservative care first. If that doesn’t work then let’s think about the surgery. But, in many of these cases Dr. Student says that over ninety-five percent of the patients who went to a chiropractor within three months had significant improvement.

We’re going to know if we’re gonna get this thing better and that is definitely well worth checking out chiropractic to see if we can help you.

Also, Dr. Studin pointed out that only forty percent of patients who sought surgery got any type of relief. He also mentioned that over sixty percent of the patients that went to the chiropractors are getting the relief they were looking for. So, pretty amazing stats if you look at it.

So my mission is let’s try conservative care first and then if that doesn’t work let’s do a neurological console. It doesn’t hurt to get the MRI, let’s take a look at let’s see if chiropractic is right for you.

If you have these issues they can be severe, it might require some intensive work upfront but you don’t have to come forever.

To determine if Chiropractic Is right for you so if you have these problems, know somebody suffering schedule consultation. I would be happy to take a look. I’ve been doing this for over 24 years, helping people get back on track with their health.

It’s Dr. Troy in Vancouver, Washington. (360) 260-6903 that’s my number if you want to schedule a consultation to see if natural chiropractic care is right for you.