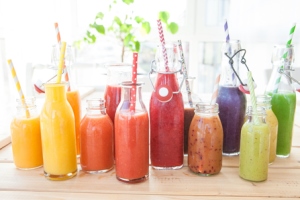 You know a lot of lot of rap has been happening on fat. “Hey, that’s going to make you fat!” Well, it’s actually the inability to burn fat.  So the more fat you eat and less carbs you eat, the more fat you’re going to burn, instead of carbs or sugar for fuel.

So today I want to show you a fat smoothie.  I’m going to start with a couple of these things. These are garden fresh eggs.  My daughter just brought these to me.   I would recommend two eggs.  We crack them open. We’re going to eat them raw, well, drink them exactly raw like Rocky.  If you’ve got an issue with raw eggs then switch it up.  But there’s great fat in those yolks. These are farm fresh.  These aren’t the ones have been in the store.

Next, I want to put in some coconut flakes, this is a coconut fat smoothie, so put some coconut flakes in there, or whatever you like, a tablespoon of whatever.  Then you put flaxseed, you could put chia seeds, but flax is a good choice to put some extra fat in your diet. We’ve got a nice little bit of flaxseed.  We put the flax in there and then we take the blender and blend this up.

We recommend doing fruit in the morning until about noon. Then around noontime, you want to pound on some fat for fuel, so it can rock you through the rest of the day.  I’m just going to turn this on real slow and depending on how many people you have you can throw some ice in here just really depends on your preference.  Smoothie is an art form, so there’s no perfect way to make a smoothie, but my kids love.  There’s one thing I didn’t mention. You can also put honey in here; makes it even better.

We finished blending up our fat smoothie.  Let’s see how we did here.  I like this Vitamix and great.  Again, if you are a Seahawks fan, you put your smoothie in the Seahawks glass.  Look at that, you’ve got that nice, chocolaty fat smoothie.  Delish, a little chewy, but very good. Coconut, chocolate, good stuff!

If you want one, come over and see me at Zenaptic Chiropractic.  This is Dr. Troy, serving Vancouver for 22 years.  Free consultation for anyone interested in chiropractic care, call our office (360) 260-6903.  Go hawks and drink your smoothie!