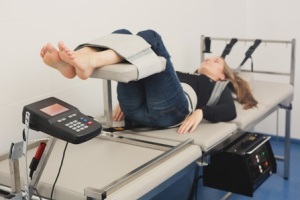 Spinal decompression is something everyone should look into before getting back surgery. Research shows that within less than two months most people are back to their normal activities.

If you would like to learn more, give us a call and set up a free consultation.

You know, there are a lot of people out there suffering. They estimate there are over 2 million Americans out there right now suffering from lower back pain. So what do you do for that?

In my case, I injured my lower back and an MRI found that I had two disc bulges and an annular tear. I was doing acupuncture, I was doing massage, I was doing chiropractic and getting adjusted all the time. Nothing was helping.

I was like, what do I have to do? I went to a doctor who works with Zenaptic Chiropractic who actually took care of me and within 2-3 weeks I was pretty much fully functional. 90% of my pain was gone, it was pretty amazing to me!

I said I am going to buy one of these machines because I have had patients in my 25 years that the traditional stuff didn’t get them to where I think they could have been. I added this adjunct to our office and here is what some of the research is showing.

Georgetown University looked at 50 patients, a mixture of women and men, and they looked at non-invasive treatments for lumbosacral (low back) pain. So pain in the legs, numbness, tingling, sciatica type pain. Even paresthesia, altered sensation. Sometimes we will see changes with reflex that can improve, even foot drop. These things may be able to be helped.

What John-Hopkins found is that the average person had low back pain for at least 2.6 years. The shortest duration of back pain was 3 months, the longest patient that was in the study had low back pain for 15 years. I can’t tell you how many times I’ve had people come into our office that have been in pain for 5, 10, 15, 20 years and no one has ever shown them a way to feel better.

What would that mean if you can’t golf? Or garden or ski? Or hike or play with your grandkid because of severe debilitating back pain? I know what that’s like, my kids would always say ‘Dad pick me up!’ I would say I can’t because my back hurts. My wife’s like ‘Get off dad! His back hurts!’ So now I am able to pick my kids up. So, really it’s a true miracle when you can really help people that have been chronic back pain sufferers recover.

One more thing, in the Journal of Neuro Imaging they found that 25% – 100% of the disc herniations reduced post-MRI. So what that means is that after disc decompression treatments, their disc herniations on the post-MRI were actually improved. Some of them up to 100%. Ten out of fourteen of the patients were 90% better who had disabling pain which was affecting their quality of their life. They also found out 85% of the patients studied were improved clinically and there was a correlation with improved MRI findings. It’s amazing to me.

Also, another thing is they did a study with DRX outcomes. They look at 219 patients. 86% of the patients had complete resolution of their pain. I don’t know about you but if you are looking at back surgery…back surgery there tends to be a high failure rate. Meaning you have a discectomy, for example, the problem may come back in 3-5 years. That is what they are trying to show about 85% of all back surgeries fail within 5 years. So what does that mean? You’re back for another surgery. So if we can show people a way to help avoid surgery, help avoid the medications, get their life back. That’s really what it is about to me.

And sometimes there are people that definitely do need surgical procedures. But this is an alternative to doing that, and if it works and with the studies and showing that a majority of people are getting a significant relief with using spinal disc decompression.

So if you’re interested in getting checked out and having a consultation with one of the doctors and Zenaptic Chiropractic call the office at (360) 260- 6903.