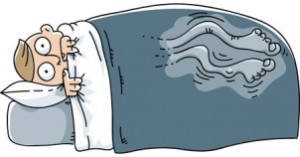 Restless leg syndrome can be cared for using gentle chiropractic adjustments. Vancouver chiropractor Dr. Troy Dreiling explains in the video below. Call for a free consultation with Dr. Troy.

What is that you ask? A lot of people suffer from this, it was very common about 10 years ago.

Many doctors would diagnose restless leg syndrome and would prescribe medication, but in fact, restless leg syndrome looks like this: People will want to shake their leg all the time, they feel like it’s got to move, they can’t calm down, they will be up all night because it will keep them awake.

What causes that? What would cause your leg to feel like it’s got to move all the time or it’s restless?

One of the big things that we know is your leg is controlled through the spinal cord down the sciatic nerve into the leg.

I recently had a patient who was exercising and walking a lot; he stopped exercising. When you exercise you’re putting oxygen and blood flow into your muscles and nerves. Now, he’s sitting on the couch being a couch potato. His legs are saying, hey I’m restless, I want to move. So, it could be a sign that you need to work out.

The other thing that can happen is the vertebra in the spine will get out of alignment, impinge that nerve and you will lose oxygen and nutrients to the nerve. Then your body is saying, hey I got to wiggle, I got to move, I’ve got to keep this thing awake. So we want to find out what is causing it.

One of the other things you can have is a mineral deficiency. Sometimes with restless leg syndrome, you will have cramping. This is an amazing product to help with that, this is called Wuji Chlorella. I put everybody on it. Especially people with cramping, the number one sign is mineral deficiency. This has over 20 different minerals in this and vitamins, so it’s a great thing to help your body recover from whatever you’re suffering from. It’s a whole food, it’s generic, it’s great.

The first thing we determine is if there is a misalignment; a pelvic misalignment or bone misalignment in the spine they can be irritating the sciatic nerve causing your restless leg syndrome. If there is, we remove that and your body will get better. That’s what chiropractic is all about, helping you get better.

This is Dr. Troy. I am happy to help you get better. Call our office, come in and get checked 260-6903. This is the Vancouver chiropractor.

According to the National Institute of Neurological Disorders and Strokes (a subdivision of the National Institute of Health), restless leg syndrome, also known as Willis-Ekbom Disease, affects between 7 to 10 percent of the U.S. population. Of those who have it, over 80 percent also suffer from periodic limb movement of sleep, which is characterized by involuntary limb twitching during sleep. (https://www.ninds.nih.gov/Disorders/Patient-Caregiver-Education/Fact-Sheets/Restless-Legs-Syndrome-Fact-Sheet)

What exactly is restless legs syndrome? It is a disorder that creates a strong urge to move your legs. This often occurs later in the day or at night, which is why it is classified as a sleeping disorder. It can also happen when a person has been inactive for an extended period of time, such as on a flight. The only way to relieve the symptoms is to continually move the legs or get up and walk around. However, the symptoms will often return as soon as the person stops moving.

Restless leg syndrome afflicts both men and women, with women slightly more likely to show severe symptoms. Likewise, the syndrome can first appear at any age, but the disorder is generally more prominent among those who are middle-aged or older.

Although it is considered a neurological sensory disorder, the exact causes can be difficult to determine. A lack of exercise or activity seems to be one cause. There has also been research that suggests it is at least somewhat related to genetics, with an onset of symptoms likely before age 40. Finally, scientists have found that an interruption of the dopamine pathways in a person’s body can increase the likelihood of symptoms occurring (which is also the case in patient’s suffering from Parkinson’s disease).

Other known causes include the following:

There is no test designed for identifying those suffering from restless leg syndrome. One strong indicator is an overwhelming urge to move the legs that is associated with unpleasant sensations, especially if these urges worsen during inactivity and can be relieved by movement.

Relevant information to supply your doctor with includes your family medical history, any current medications you are taking, and your recent sleep patterns. It may be necessary to undergo a full neurological and physical exam. Typical treatments include iron supplements, lifestyle changes and increased exercise, opioids, and dopaminergic agents.

Because Restless Leg Syndrome is a neurological disorder, one of the best treatments involves helping to relieve pressure on the spine and nervous system which might be impaired. The sciatic nerve, which runs from the lower back to the legs, can often be blocked or pinched by a misaligned spine, leading to all sorts of problems, including restless leg syndrome.

The good news is that RLS can often be treated without any invasive treatments or resorting to opioids and other medications. At Zenaptic Chiropractic, we rely on a natural combination of massage, spinal adjustments, and controlled exercise to treat your restless leg syndrome.

If you or a loved one is suffering from restless leg syndrome, you can come in for a FREE consultation. Our staff is committed to improving the health and well-being of all our patients. Call us today to start down the path towards a more active lifestyle!