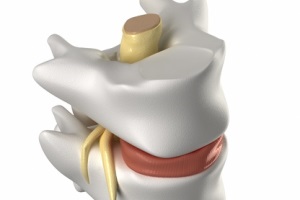 A ruptured disc is usually caused by some kind of trauma or lifting. Not only is it painful but if not taken care of it can lead to other problems.

I want to talk about ruptured discs today.

A lot of people have had ruptured discs or they’ve been diagnosed or they know someone.

What Is A Ruptured Disc?

Inside the disc, this is the annular fiber, inside there is a nucleus. like a jelly-filled donut so raspberry filling inside there being held by the doughnut here.

Trauma, degeneration, usually it’s trauma and lifting. You know if you lift and twist you’ll put about eight hundred millimeters of mercury pressure inside that disc. Just standing there you’re putting 90 pounds on there, if you get adjusted it’s 40 pounds.

Now, if that material gets ruptured out sometimes you can get fragments in the canal which can cause problems. Sometimes it has to be defragmented but I’ve seen many times over the years that patients with ruptured discs can actually improve with spinal disc decompression therapy, with rehab.

It’s a slow process it takes time but a lot of people today are very anxious to have any types of surgery or shots and that’s okay I understand. There may be an alternative natural method to helping relieve the pain of ruptured discs.

One of my good friends was windsurfing he hit his neck rupture the disc in his neck and lost ninety percent, ninety-five percent of the posterior muscles. It looked like nothing was there. He’s like, “ I’m not doing surgery, I’m not doing surgery.”  Took him about six to nine months of rehab, getting adjusted and doing a bunch of stuff. He got full use of it back without having surgery.

So, many people wouldn’t have gone through that painstaking effort but he wanted to do it naturally and he did and he’s a chiropractor and thank God for that.

Spinal decompression might be right if you do have that issue and the only way to know is it schedule a consultation with us. (360) 260-6903 to see if you qualify for a spinal decompression if you’ve got some disc issues that need to be addressed.

This is Dr. Troy in Vancouver,  Washington

The first thing you’ll likely do after learning you have a ruptured disc is rush to Google and find out exactly what you’re dealing with. When a disc is ruptured (slipped or bulged are also common terms) what we really mean is that it’s been herniated. This is the medical term.

A quick anatomy lesson: your spinal column is made up of 33 bones known as vertebrae, which are linked together and which have a hollow space running through the center of them to protect your spinal cord. Between each vertebra is a disc of tissue that acts as a shock absorber, similar to the cartilage in your joints, so as to reduce the wear and tear on your spine.

Each of these discs is made up of a tough outer layer, the annulus fibrosus, and a soft inner layer, the nucleus pulposus. Cracks can occur in the outer layer that allow the gelatin-like inner substance to begin to push out. This is what we mean by a herniated or ruptured disc.

What Can Cuse A Ruptured Disc?

There are a number of things that can cause someone’s disc to rupture. Obviously any kind of physical trauma, whether from a motor vehicle accident, a sports injury, or a fall, can damage someone’s spine. But other factors can have an impact as well, such as being overweight, having bad posture, or the natural aging process.

Many people are surprised to learn that smoking can actually contribute to a herniated disc. Genetics play a role too, with some people being predisposed to discs that wear down faster than normal. Another risk factor is people who work in jobs that involve constant vibrations to the spine, such as truck drivers, construction workers, and delivery people.

In many cases, the obvious trigger that resulted in sudden pain is not the actual cause. Generally, herniated discs occur over time, as the outer disc layer slowly deteriorates. This makes them much more prone to injury if a fall, collision, or other impact occurs. In fact, we’ve seen people who ruptured a disc because of a sneeze. Obviously, in such circumstances, the damage had already been done, and the sneeze was just the final straw.

When dealing with a ruptured disc, a chiropractor will look at several areas to determine the severity of your condition. A reflex test will help inform whether there is any nerve damage or blockage that is taking place. Another troubling sign is if you are suffering from weakened or atrophying muscles. It’s also important to check on the entire spine, not just the area experiencing pain, to locate any and all misalignments that might be contributing to your ailment.

If you or someone you know has been diagnosed with a ruptured or herniated disc, you need to do more than just treat the pain. At Zenapatic Chiropractic, we focus on the cause of your condition, rather than just the symptoms. Come in today for a FREE consultation so that we can diagnose the underlying causes of your problem and formulate a treatment plan that will return you to full health without relying on heavy medication or surgery.